I’m sorry to say that he was extremely prone to error, a phrase which here means “always had a cough, and had placed the three Baudelaire children in an assortment of dangerous positions.”

No matter who you are, no matter where you live, and no matter how many people are chasing you, what you don’t read is often as important as what you do read.

The book you are holding in your two hands right now — assuming that you are, in fact, holding this book, and that you have only two hands — is one of two books in the world that will show you the difference between the word “nervous” and the word “anxious.” The other book, of course, is the dictionary, and if I were you I would read that book instead.

… if you are a student you should always get a good night’s sleep unless you have come to the good part of your book, and then you should stay up all night and let your schoolwork fall by the wayside, a phrase which means “flunk.” 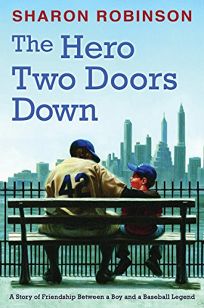 I read this book to the students in my Sunshine State Club. It’s the story of a boy (Stephen) living two doors down from his hero, Jackie Robinson in Brooklyn in the year 1948. The book was written by Sharon Robinson (Jackie’s daughter) and is based on “the true story of a friendship between a boy and a baseball legend.”

The kids loved the book and it was fun to discuss what it was like to live in the 1940’s. It’s hard for them to imagine life without a cell phone, let alone life where you can only hear baseball on the radio, instead of watching on tv. We learned about Jackie Robinson and his courage and integrity. We learned about egg creams, transistor radios, and stoopball. And we learned about what it was like to live in a Jewish neighborhood in Brooklyn in 1948. It was also fun to talk to the kids about who their heroes are and what it would feel like to be friends with them.

This book is great for elementary students, especially sports fans.

Whether it was Uncle Monty’s library of reptile books, or Aunt Josephine’s library of grammar books, or Justice Strauss’s library of law books, or, best of all, their parents’ library of all kinds of books — all burned up now, alas — libraries always made them feel a little bit better.

Libraries make me feel better too. 🙂

Just because something is typed — whether it is typed on a business card or typed in a newspaper or book — this does not mean that it is true.

The Baudelaire children are well aware of this simple fact, which makes them smarter than some adults.

Mr. Poe was kindhearted, but it is not enough in this world to be kindhearted, particularly if you are responsible for keeping children out of danger.

I am sorry to tell you that this story begins with the Baudelaire orphans traveling along this most displeasing road, and that from this moment on, the story only gets worse.

If you are interested in stories with happy endings, you would be better off reading some other books. In this book, not only is there no happy ending, there is no happy beginning and very few happy things in the middle.